It wasn’t that many years ago that the idea of an electric pickup truck was hard to take seriously. Time have changed, though, and quickly. We’ve seen announcements from Ford, GMC and most memorably from Tesla, but also from startups like Rivian, Bollinger and Lordstown.

Today, there are at least a dozen models in the works, and we can add the name of Canoo to the list. The Los Angeles-based company, which you may recall presented an electric delivery van prototype last year, has just shown what its electric pickup will look like.

The least we can say is that the design is original. Those interested in older vehicles will recognize the approach of a truck with the cab resting above the engine, but there are a number of other intriguing design elements. For example, the bed can be extended from six to eight feet, and the lights, invisible when the tailgate doors are open, are replaced by a thin vertical stripe that becomes visible in the upper part of the tailgate when lowered.

Discover Shopicar! All new makes and models and all current promotions. 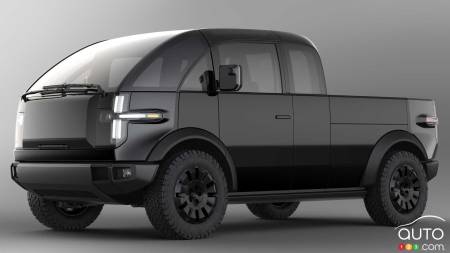 The modularity of the bed goes further. It features a load separation system to secure various items, while the sides of the bed have folding parts that can be used as worktables, workbenches or even, you never know, for diaper changes. Another interesting little feature is a sidestep that makes it easier to load or unload items in the box. Just below the built-in step is a cargo area large enough to hold a small cooler, first aid kit, laptop and other items.

Up front, the Canoo electric pickup has a fold-down worktable with extendable sides to accommodate tools needed on a job site. If you need more cargo capacity, a roof rack is available. Even a camping kit can be added to the roof. Several easily accessible power outlets for recharging devices are present all over. 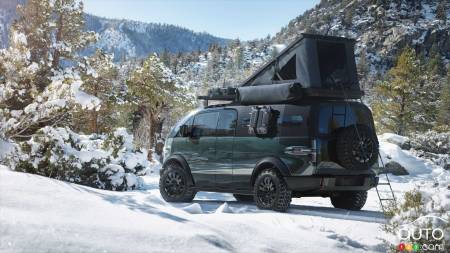 As for the mechanical components, Canoo says there will be one- and two-engine configurations; the latter system brings with it all-wheel drive. Total output is 600 hp and 550 lb-ft-feet of torque, and the vehicle’s battery pack delivers a range of over 320 km when unloaded.

The first deliveries of the model are scheduled to take place only in 2023 – at the earliest. Starting in the second quarter of this year, it will be possible to reserve a model. Prices have not yet been announced. 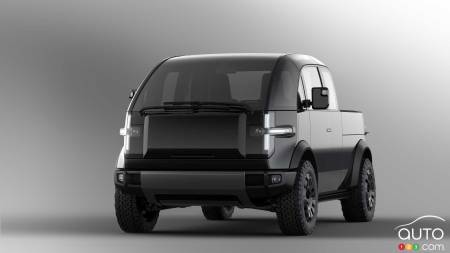